Lessons of Generations Past 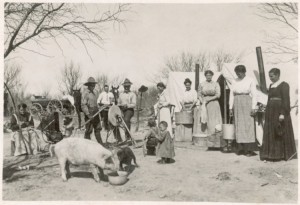 Lessons of Generations Past

This week we take a journey into the past, an exploration of how things were done in “The Old Days.” For some of us, when we consider things the way they were.  Sometimes it is with nostalgia or with a whimsical smile it brings warm fuzzy thoughts. For others of us it may make us cringe at the thought of chopping wood or hanging the laundry outside on a cold winter’s day. No matter the feelings we get when thoughts of these days are running through our mind. There is much to be said for “the way we used to do it.”

An old saying that I am constantly reminded of that often brings me ponderings of things long past was from a book titled, Reason in Common Sense, By George Santayana. It said, “Those who cannot remember the past, are condemned to repeat it,”. He is often misquoted as saying, “History forgotten is doomed to repeat.” which is a more common rendering of the saying an often equated to Einstein, but either way it is a good thought.

However, how does that apply to our show?  It doesn’t in the strictest sense of things, but in a more abstract way it does. Think on this, at some point these skills were learned, but before the time things were perfected mistakes were made that sometimes brought on famine, disease and other dystopian times.  Forgetting the lessons of the past no matter the kind of lesson, can often bring much hard times.

Delving more specifically this week into the “Great Depression” I wish to give an insight into the differences between today and those days of hard times during the depression. The ways that people then coped with the difficulties and what it would mean to many today.

Research these and other topics to keep from forgetting the past. I hope to discuss many little things from acorn flour to soap making and even the fact that butter can also be canned, or whatever tangent i might also find myself on this week. All the great inventions and gadgets of today, ain’t got nothing on Gramma’s recipe for apple butter or home made bread.

Talking back to the depression, something comes to mind.  When things got tough for our grandparents and the markets collapsed, bread was indeed a days wages and food was scarce.  So how did they make it?  Think about this for a minute, what is it that makes now different than then?

Firstly, in today’s society everything is automated and handed to us.  I can’t tell you how many times I have heard something so completely asinine that I am left shaking my head in disbelief.  I have had people say something to the effect of where chicken comes from is the grocery store.  Do they think it magically appears there?  Does it ever occur to them that this chicken was once… yes you got it…a Chicken!!!  That this mythical animal does indeed exist?  We have become so far removed from the “processes” of living that we could not survive if we today had to endure the “Great Depression.”

Forget the “Great Depression” what about an ice storm or wind storm like when Hurricane Ike meandered up through the Ohio Valley?  Some short term bumps in our daily lives can instantly turn our Utopia into a Dystopia in very short order!

If you had not figured out how they got by yet then you are probably one of the people who need to take some time to really reflect on the lessons of the past.  The reason it was hard times and not end times was simply that at that time they were already accustomed to doing most tasks.  Most families had garden, maybe some chickens.  Hanging clothes on the line and sewing your clothes was common place.

Going further back in history to the civil war, there is a whole book that was written

to help those of the besieged south to get by called The Confederate Cookbook this book written in 1863 has some amazing information in it.  I highly recommend picking up a copy.  Another great book from the era is The Household Cyclopedia, of which I get an interesting amount of grief about because of the clearly sexist roles laid out in the book.  It is none the less an amazing resource.

There is much to be gathered from past trial and error, from those who paved the way for the age of conveniences.  Many worked countless hours just to keep the food on the table and could you?  If you were put into the same position could you?

Ask yourself these questions and see if you can answer honestly.  If today the markets collapsed and hyperinflation were to make it so that every meal was a struggle to just procure let alone prepare could you do it?

Get your copy of Dystopia… The Book HERE!

Connect with the Author